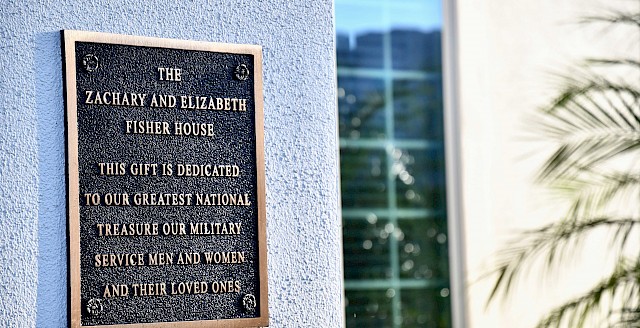 In the mid-1970's, as I came onto the grounds of the National Naval Medical Center, Bethesda for a clinic visit, I saw a helicopter land at the medical center heliport. A sailor, his wife and two children came down the steps with their luggage. I wondered where they would stay. Living in the D. C. area, I knew that hotels and motels in the Bethesda area were expensive and likely beyond the means of couples such as this one. These thoughts remained on my mind for years.

When my husband became the Chief of Naval Operations in 1986, I thought this might be a good time to pursue my dream of providing affordable temporary housing for families of those facing a medical crisis at Bethesda. I spoke with Mrs. Iris Reiman, then president of the Washington area Naval Officers Wives Club, and asked her if she would explore how members felt about taking on such a project. She brought up the subject at next meeting and reported agreement on planning the concept. We originally thought about finding an unused or underused building on the medical center grounds which could be converted into a place for people to stay on a temporary basis.

In early 1990, my husband received a call from our friend, Zachary Fisher, who had provided generous assistance to families of service personnel beset by tragedy. Zachary indicated that he was prepared to expand his support and asked my husband for thoughts on projects he might undertake which would benefit personnel of all military services. Among other ideas, my husband mentioned my dream. Zachary was taken by the concept and we discussed it further. He said, "I'm a builder, I have my own architect, we can do this." Things moved rapidly thereafter, bureaucratic hurdles were overcome, a site was identified for the first house, and in 1991, the first Fisher House opened with President and Mrs. Bush joining the Fishers and us at the dedication ceremony. The dream had come true.

Zachary Fisher told me later it was the most satisfying thing he'd ever done. In a letter to my husband and me in January, 1992, commenting on a thank-you letter from a wife who had stayed at Fisher House I at Bethesda, he wrote: "The attached letter says it all. I knew how important the Fisher Houses would be - but I never imagined how many lives would be changed!" Zachary and Elizabeth were true American patriots.